Although the founding letter of the monastery was lost, according to the data from the Catalogus Ninvensis, it already existed as a branch of the Provostry of Csorna in 1234. Subsequent documents recount that its founder was Ban Dénes from the Türje clan, who first was ban of Slavonia and later held the office of Palatine. Another outstanding figure from the clan was Philip, who was the bishop of Zagreb from 1248, and then served as archbishop of Esztergom between 1262 and 1272. It is not excluded that this widely travelled high priest, who served on diplomatic missions, could have played an important part in the decoration of the clan’s monastery. A rare type of tabernacle was built in the main choir in 1478, which was placed in the southern wall of the southern side nave in the 1760s. At that time, significant paintings were created, and altars were probably also erected, as an uncertain source from the 18th century mentions that during the 16th century pillage of the church the Hagymásys stole the wonderworking painting of the Holy Virgin from the main altar. This important interior decoration took place probably during the period of Andrew III’s long service as a provost, between 1465 and 1517. The Turkish campaign of 1532 affected Türje as well, but a more serious destruction was carried out by the members of the new patron family who have become Protestant. Between 1543 and 1547 Kristóf and Eszták Hagymásy from Berekszó attacked the monastery several times and they even had the St. Anna’s Chapel at the northern side of the church destroyed, having its building material carried away for the construction of their castle in Szentgrót. The monastery was set on fire in 1547, a fate also shared by the church in 1566. Then, in the absence of the provost, Benedek Kövesy, the commander of Sümeg Castle robbed the church and then set fire to it. Following this, András Köves, the bishop of Veszprém, who ordered the fortification of Sümeg Castle as well, took possession of Türje, transforming the monastery into a castrum. From 1608 the fortified monastery fell into the hands of commanders, some of whom tried to restore the original function of the church in the second half of the 17th century. Most prominent among these were the collector of titles, Ferenc Folnay (1644-1666), Mihály Prodinszky (1666-1669) and Mihály Dvornikivits (1679-1703), who after having been appointed bishop of Vác, gave up all his other titles, keeping only Türje, because he spent a lot of money on the restoration of the church. From 1655 the Batthyány family became the patron family of the monastery. It began to slowly flourish after 1703, when the Premonstratensians regained possession of their Hungarian estates and Franz von Schöllingen, the Abbot of Pernegg acquired Türje as well. From 1721, in the time of Provost Adalbert Pintár, Türje became an independent provostry again, and the Baroque monastery was built south of the church at this same time. In 1742, it was reunited with Csorna and its warden, Provost Raffael Nolbek had major works carried out on the building ensemble. By transforming its medieval openings, eight new Baroque windows were opened in the church and the pews that can be seen today were built. The church received its present form and interior decoration between 1757–67, in the time of Provost Tádé Schrábl. The closure of the main choir and the Baroque chapel of St. Anna were built in this period. The altars and the murals by István Dorffmaister were completed. A larger interior renovation was commissioned by Provost Adolf Kuncz in 1900. During these works Julius Kraus, a painter from Győr repainted Dorffmaister’s murals completely. Between 1920–22 the Baroque architecture of the towers was removed, and the asymmetrical medieval openings were restored based on Kálmán Lux’s plans.

Through the long centuries of the church’s history, paintings were created in seven major periods. The second one of these is on the southern wall of the southern side nave depicting the legend of St. Ladislaus. This cycle begins from the triumphal arch of the side chapel that was demolished in the middle of the 18th century, where the scenes follow each other from east to west. The painted surface is surrounded by a simple frame consisting of black, ochre and red lines. This frame is peculiar as large consecration crosses ending in trefoils were painted on it. The first three scenes almost merge into one another. The army riding out, the chase and the fight scenes merge into one painting. Under the walls of the building with several towers symbolizing Oradea (Hu: Nagyvárad), mail armoured soldiers with lances and arches accompany the holy king, who wears a knight’s armour and is riding on a white horse. In front of him the Cuman who abducted the girl is fleeing on a brown horse. He is wearing a caftan and a Cuman felt cap, a very large black arrow quiver hanging on his side. The abducted girl is disproportionately small compared to the other characters. The Cuman bends his bow just like the other Cuman warriors fleeing on grey horses in front of him. The following scene is the scene of the girl pulling the Cuman off his horse, which rarely occurs in other cycles. Here as well you can see the holy king wearing a closed helm and the Cuman falling head down off his horse, being pulled down by the girl. The following two scenes – which based on the uncovered fragments could be the scenes of the fight and the killing of the Cuman – were greatly damaged by the enlarged window in 1741 and by the opening of a late Gothic niche serving for a reliquary embedded in this wall in 1760. The last scene is of the young king resting, with his head on the girl’s lap. His crown placed on the ground can be seen above him. The girl is caressing St. Ladislaus’ shoulder-length hair with her left hand. Ladislaus is thought to be young because he doesn’t have a beard, and this is unique among the known illustrations of this legend. Here we also witness the strange phenomenon that the resting horses stand outside the frame of the painting. Their reins are tied to the branch of the tree, under the shade of which St. Ladislaus is resting, the branch extending beyond the frame. These murals begun with the fresco and completed with the secco technique were probably created, in our opinion, in the first decades of the 14th century. They have several special features. For example, the holy king’s head is not surrounded by a halo, and unlike any other illustration, his face cannot be seen, as his head is covered with a closed bucket helm.

In addition to the medieval wall painting, St. Ladislaus appears on the murals of the church once again. During the painting of the choir by István Dorffmaister in 1763, the statuesque figure of St. Ladislaus was also painted among the figures of the Hungarian holy kings in the grisaille technique on the southern and northern walls of the choir.

Türje village lies east of the Zala River, near Zalavári Ridge, in the Lower Zala Valley. Most of the old beech, oak and hornbeam forests have disappeared from the area, having been replaced by agricultural areas, arable lands, and orchards. The river turns south at the so-called Türje turn, and besides changing direction, its gradient becomes lower as well. The groves along the Zala are home to many species. Further from the river, bogs and sedges, meadows, and hardwood grooves make the landscape more varied. 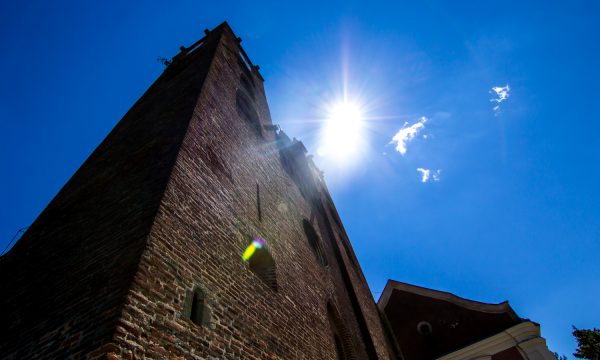 The thick shelled river mussel (Unio crassus) lives in the clean waters of rivers and creek, but due to water pollution, its numbers are dwindling, and it has become a protected species.

The European fire-bellied toad (Bombina bombina), living mainly in the waters of plains, is easily recognized by its characteristic voice. This amphibian is active from March, and its breeding season lasts for months, beginning in April. The Danube crested newt (Triturus dobrogicus) can be found in the backwaters and permanent channels of the area. It is a predatory species, eating mainly mosquito and insect larvae, small crabs, and slugs, too.

The common moorhen (Gallinula chloropus) commonly nests nearby still and flowing waters as well. Its mature specimen are easy to recognize by their yellow-ending, red beaks. When hiding in the reeds, its gurgling sound gives it away. The Syrian woodpecker (Dendrocopos syriacus) lives in the gardens, parks, and grooves of the area.

The least weasel (Mustela nivalis) is the smallest carnivore found in Hungary. Its habitats are shrubby, bushy glades and floodplain grooves. It can also be found on the edges of meadows, lucerne lands, and along smaller watercourses. It doesn’t dig its own den, instead it occupies the burrows of ground squirrels, hamsters, and moles.

Looking for accomodation around Türje? Click the button below, and you can find a suitable place in just a few minutes.