The Hungarian conquerors did not settle down north from the valley of Bódva. At the end of the 12th century the area – still barely populated, but rich in wildllife – belonged administratively to the county of Torna. Torna has become the centre of the area known as the Black-forest. The village called Szentandrás (after the patron of the local church) also dates from this period, as do the two neighbouring villages, Kovácsi and Mile. All these names indicate the common professions of the area; Kovácsi refers to the blacksmiths, while Mile celebrates the work of charcoal-burners. 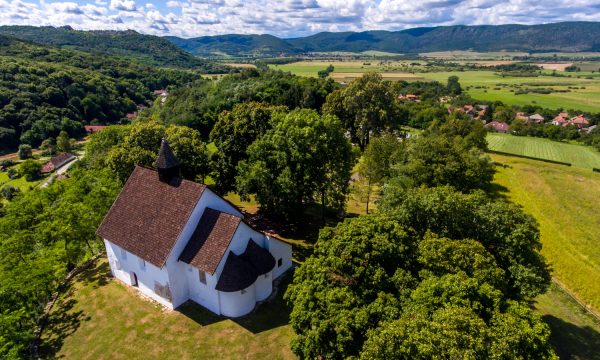 The church of Szentandrás appears first in written documents in 1283. In 1388 the village was in the possession of the Bebek family; starting from the 1410s it belonged to their Szádvár estates. After the Turkish invasion it is mentioned in 1576 as a destroyed village. In 1713 only the walls of the church were standing. After it passed into the possession of the Esterházy family, around 1730, they settled a considerable amount of Slovak population in the perished village. At that time the church was still in ruins, but its breathtaking murals are already mentioned. They managed to rebuild the edifice in the 18th century, and it underwent several reconstructions in 1910 and in 1970. The church has kept its medieval character. Its two juxtalinear apses form a twin – unfortunately the origin and function of this solution (which is entirely unique in this area) is still unknown. In its early form, built around the 1200s, a small nave completed the apses. This old part of the church forms the sanctuary of today’s building. In the middle of the 14th century a bigger nave was built, the foiled window was constructed and the walls got decorated with the aforesaid murals. The church, by this time, had two triptychs. The present-day baroque altar came from the castle of Szádvár, according to the local tradition. The pulpit and the gallery date from the 18th century.

Looking for accomodation around Tornaszentandrás? Click the button below, and you can find a suitable place in just a few minutes.