The Reformed church in Laskod is made of brick, with a single nave and a rectangular plan. The lobby area is located on the southern side and the tower is attached to the building on the western side. The latter was erected in 1863, but the church was built much earlier – the first time it was mentioned in sources was in 1438. 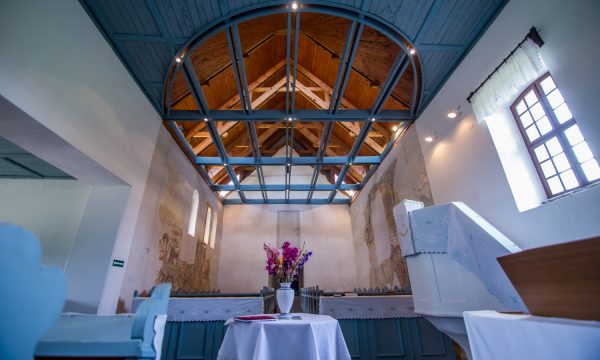 However based on the architectural and artistic details uncovered, it was probably built at the very end of the 13th century, possibly at the beginning of the following century. Its extensive exploration and restoration took place in the mid-1990s, when a glass wall was erected on the western side of the nave, with the aim of emphasizing the medieval details of the church, which had not been visible until then. Another result of this was the discovery of the murals that were created in two different eras, and their restoration was carried out by László Seres between 1998 and 1999. The murals depicting certain scenes of Saint Ladislaus’ legend belong to the former first layer and are fragmented. The murals in the lower register of the southern wall of the church depicted three scenes from the legend and were created in the first third of the 14th century.

The story unfolds from right to left and consists of the following scenes: the Chase – only the figure of the Cuman can be seen here, the Wrestling – the fight between St. Ladislaus and the Cuman –, and the Beheading.

From the style, it can be concluded that probably the master working here was in close contact with the workshop that painted the murals in Lónya, Csaroda, Gelénes (Hungary) and Palágykomoróc (Palad’-Komarivtsi in Zakarpatska, Ukraine). The technical solution is characterized by the fact that the mural was painted on a very thin plaster layer, almost on the brick wall, and the framing was not emphasized either.

Laskod is a village at the edge of the Middle Nyírség region of Hungary, its surroundings dominated by hills and sand hills. Its hornbeam and oak forests, and the sods of the hills are gone today. “We can only guess what these lands looked liked before man took the bread from the inhabitants of this aquatic kingdom of the past”, wrote Imre Szlabóczky.

The draining of waters and the building of channels have transformed the landscape, but some remnants of the old ecosystem still remain. One of these sanctuaries of old is the nearby Heron’s Field (Hu: Daru-rét), a wetland in a former riverbed. This area is characterized by shrubs growing on lands that are no longer cultivated, although we can still find cut or grazed meadows as well.

The bogs and willows have retreated into small patches which are still home to the native and protected marsh angelica (Angelica palustris), found only here in Hungary, and becoming increasingly rare across Europe. Its habitat is threatened by the draining and drying up of the waters, and by ploughing and afforestation as well. Another rare inhabitant of the bogs is the Barneby’s thistle (Cirsium brachycephalum), a native plant of the Carpathian Basin. It is very sensitive to the changes in its environment, and it could entirely vanish from the area after a prolonged flood or drought. The marsh pea (Lathyrus palustris), flowering in May and June, has also disappeared from many of its previous habitats due to drainage.

The waterlogged areas, ponds, and permanent channels provide excellent feeding grounds to the black storks (Ciconia nigra) nesting in the nearby forests. Unlike its white cousin, the black stork avoids humans, and so nests on the top of high trees in the undisturbed forests. It feeds mainly on fish and frogs but occasionally eats small lizards and mammals as well.

When the annual precipitation is sufficiently large, many migratory birds stop to feed in the flooded meadows. If these watery habitats are permanent enough, the common redshank (Tringa totanus), common snipe (Gallinago gallinago), and lapwings (Vanellinae) may also build nests in them. The western marsh harrier also (Circus aeruginosus) nests frequently in the inshore vegetation of the natural or artificial still waters. After its spectacular mating flight, the harrier makes its home from reed, and the nest reaches almost one meter in diameter. Its slim and long wings are excellent for manoeuvring in flight, and besides other waterfront birds, it catches small mammals and reptiles as well.

Looking for accomodation around Laskod? Click the button below, and you can find a suitable place in just a few minutes.