The murals covered with lime during the Reformation were revealed in 1885 by József Huszka, after which they whitewashed them again. The whole surface of the murals was uncovered only after 1994.  The murals of the nave represent in two registers scenes form the Passion of Christ, a rich composition of the Last Judgement and the Legend of Saint Ladislaus, unique in Europe. 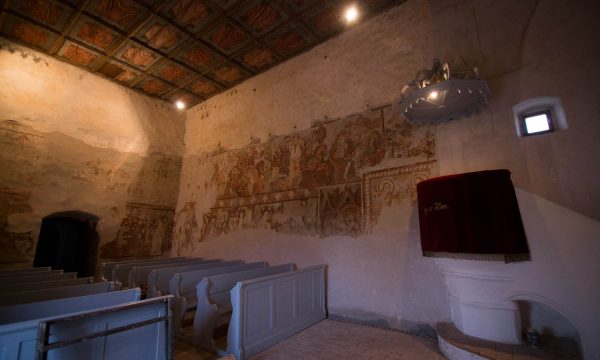 The lower register showing the life, Passion and Accession of Christ is composed of 13, encased scenes. The upper register of the southern wall is decorated with the mural of the Last Judgement, and in its centre we see the figure of Christ Pantocrator surrounded by an almond-shaped aureole of light (a mandorla). On his left and right there are six and six apostles. Below the mandorla we see Virgin Mary and John the Baptist, kneeling. The mural depicting the legend of Saint Ladislaus covers the western and northern walls of the nave, a cycle which was widely spread in Medieval Hungary.

Although the Chilieni Unitarian church is a small rural church building, its murals of great historical and artistic value make it one of the most important historic monuments of the region.

South of Sfântu Gheorghe (Hu: Sepsiszentgyörgy, Ge: Sankt Georg) there is a little village guarded by the river Olt: Chilieni. The sheltering care of the fabled river has been reciprocated by the people, and since 2011 the sections of the river around and to the south of Chilieni have been placed under protection as part of the Upper Olt Natura 2000 nature reserve (ROSCI0329). The surrounding oak forests of the river’s floodplain and the common alder (Alnus glutinosa) – common ash (Fraxinus excelsior) groves are part of the important habitats of the region. 16 bat species have been identified in the area, all of which are on the Red List of Threatened Species, and two of them, the Geoffroy’s bat (Myotis emarginatus) and the Bechstein’s bat (Myotis bechsteinii) species, have come close to extinction on multiple occasions. These bats feed on insects in the plentiful hunting grounds among the river’s vegetation, and shelter in the hollows of the older trees. The marshlands and the waters themselves are home to two Natura 2000 protected mammal species, the Eurasian beaver (Castor fiber), which had previously gone extinct in Romania, but was successfully reintroduced in 2006, and the Eurasian otter (Lutra lutra), which conducts a nocturnal lifestyle in the Carpathian basin. Ten species of fish that are on the Red List of Threatened Species can also be found here. The Romanian barbel (Barbus meridionalis petenyi) has special value for the Hungarian ichthyologists, since it is the only fish species to be named after a Hungarian scientist, its discoverer, Salamon János Petényi. This endangered species is being artificially bred and propagated by the scientific community of the  Babeş–Bolyai University. The butterfly Marsh fritillary (Euphydryas aurinia) can also be found in the habitats around Chilieni, along with several amphibian and reptile species like the native European pond turtle (Emys orbicularis), and the limbless lizard Slow worm (Anguis fragilis), which is often killed because of its snake-like appearance, despite it being one of the very few limbless lizard species of Europe.

Looking for accomodation around Chilieni? Click the button below, and you can find a suitable place in just a few minutes.