The name of the settlement lives in the memory of the Szeklers mainly due to the battle of July 2nd, 1849, which occurred in the vicinity, in which Major Áron Gábor died. The humble little Unitarian church of old, with its age indicated only by the 1718 inscription on its south entrance, became the centre of attention after the fire of 1954. It was then that its blank walls laid bare revealed medieval murals, painted Romanic-Gothic window openings and a ruined tabernacle. At the same time an archaeological excavation also took place in the interior of the church, and revealed the foundation wall of a semicircular sanctuary. They must have dismantled this earlier part of the building at the end of the 16th century, and built a new Gothic structure. 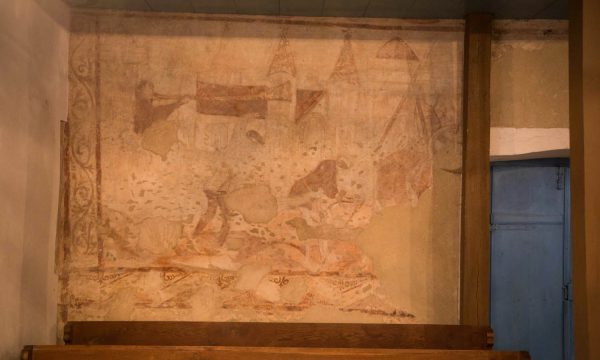 The mural paintings discovered after the fire remained somewhat intact, but in poor condition and were situated mostly on the western wall of the nave. At that time scholars believed they illustrated a scene from the Last Judgement, based on the equestrian figures. After restoration it became utterly clear that the scenes belonged to the Saint Ladislaus legend-cycle, depicting the scenes of the fortress and the exodus. Despite the blurred outline the building with four towers is apparent, one can see a man blowing a horn in one of the windows, and below two soldiers are arming the crossbow. In the scenes continuing on the northern wall of the church nave one can observe other horsemen. The scenes probably pertain to the Saint Ladislaus cycle, too, but are hard to decipher and research was unable to document and draw them properly – these are no longer visible today.

Looking for accomodation around Chichiş? Click the button below, and you can find a suitable place in just a few minutes.