Frumoasa is situated in  the north-eastern part of the Ciuc (Hu: Csíki) Basin, along the Frumoasa stream (Hu: Szépvíz). To our current knowledge the village is first mentioned in the written historical sources of the 16th century, in 1576 with a registered number of 53 families and the name “Zepwyz”. From the area of the village no medieval findings have come yet, a fact attributed by scholars to circumstance or inadequate research, because on the basis of the place name they suspect the village already existed in the Medieval period. During this time it is believed that this settlement was the last inhabited stop before venturing on the road to Moldavia. The road went along the eastern side of the village, on the hills of Csere up to Păgânul Peak (Hu: Pogányhavas), Frumos Mountain (Hu: Széphavas) and continued following the mountaintops. It ventured downwards only in the Trotuș (Hu: Tatros) valley, which was uninhabited until the 18th century, only slightly further east from the old customs (called Alte Schantz). 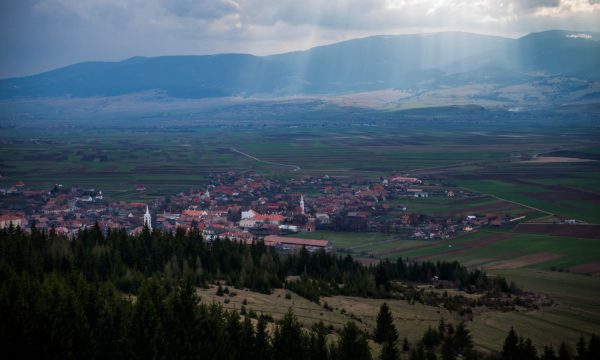 According to legend, the settlement came about in the age of King Ladislaus, and its name was given by the King himself, who exclaimed “De szép víz!” meaning “What wonder of water!” In the 17th century Armenians settled in Frumoasa, and played a significant role in the revival of trade. In the 18th  and 19th century the settlement became one of the most important centres of commerce in the Ciuc region. The settlers came to Szépvíz from Moldavia in two waves: first in 1654, then in 1672. With Armenian population settled in the village, around 1668-69 it developed into a modest urban settlement.

The village used to have a Catholic chapel built before the 1694 Mongol invasion, but after the destruction it was rebuilt later on. The current Catholic church of the village was built as late as the 1879–1891. The village also hosts an Armenian Catholic fortified church, built in a Baroque and Romantic fashion.

Looking for accomodation around Frumoasa? Click the button below, and you can find a suitable place in just a few minutes.