The village is situated on the periphery of the Ciucului de Jos (Hu: Alcsíki) basin,  east of Miercurea Ciuc (Hu: Csíkszereda),  in  the valley of the Tapolca stream. According to scholars the village name originates either from the noun mén meaning “stallion” and ság meanin “hill”, or from Saint Mennas of the Eastern Church (assumed to have lived in the 3th-4th century), one of the first adepts of Christianity, refusing to recant his faith. The settlement is mentioned in historical sources in 1567 by the name Menessagh as the biggest village of the area, having 67 houses. According to 1643 written sources, the rather large village was reported as having more than 250 families. This number grew up to 2178 locals by the 1910s. 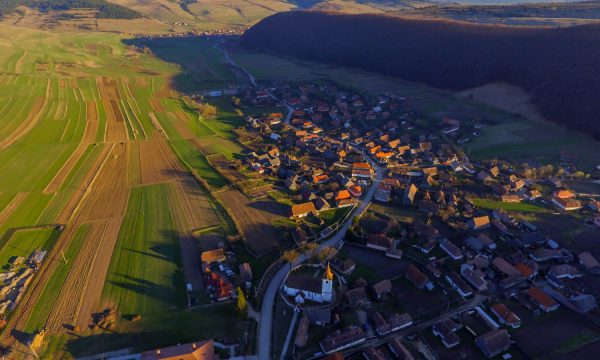 The first genuine data referring to the church is an archive document from 1583, but according to scholars the church building can be dated to the first half of the 13th century if not earlier, to the period of the Árpáds.  The Catholic church later suffered several changes. Researchers have identified 3 building phases: a Romanic period, in the 12th–14th century (sacristy window, portal stone frame); a Gothic period with Renaissance elements (sanctuary) dated to the 14th–16th century; and additional modifications, like repairs in 1665, extension with an additional Baroque style nave in 1858 and the addendum of the tower in 1836. (Elek Benkő. Középkori Székelyföld, 105, 110, 129). In the second phase, as customary in many areas, the church was decorated with frescoes on the southern wall. According to experts leading toe restoration and archaeological research in 2010 (Attila Czimbalmos, Sándor Benczédi) they are to be dated to the first half of the 14th century, and to our knowledge the fragment revealed is the second mural fragment portraying the Legend of Saint Ladislaus in the county of Ciuc, discovered after frescoes of the church of Mihăileni (Hu: Csíkszentmihály). During research it turned out that the depiction continues on the western wall, which is a rare phenomenon, although the solution is also characteristic for the case of the Saint Ladislaus murals of the church of Mugeni (Hu: Bögöz.)

Considering the modern age, we know from archive records that the village had a functioning school for a short while, and between 1919–1920 a kindergarten; we know that out of 78 children only 12 attended nursery school.

Restoration works of historic buildings create ample opportunities for performing archaeological research, which otherwise would not take place, and not merely for lack of financial resources). This is valid also in the case of Roman-Catholic church of Armăşeni. Archaeological excavations were conducted twice, once in 1999 by Daniela Marcu Istrate and later in 2007, when Botár István preformed research in the interior area of the church.

The archaeological research yielded in both cases similar results, with a few exceptions regarding the periodization of the site. These are common for all village parishes throughout Transylvania. In the Árpád period, the village had a small, humble rectangular church functioning as a parish. Later, in the 14th and 15th centuries, it was expanded, and equipped with a polygonal sanctuary, buttresses and sacristy. When a new, more robust triumphal arch was added, the southern side of the church also gained a set of buttresses, in order to release any outward thrusts caused by the new architectural element.

In the 16th century, together with the growth of congregations, churches suffered more modifications, and were redecorated. In Armăşeni, the  nave and the sanctuary were enlarged and lengthened, and on the south side buttresses were added, ensuring the stability of the new structure with longer span.

Looking for accomodation around Armăşeni? Click the button below, and you can find a suitable place in just a few minutes.