The settlement is one of the largest belonging to the Szekler seat of Odorhei (Hu: Udvarhelyszék), situated in the western part of Szeklerland. It is located in the Mugeni Basin,  in the middle section of the Târnava  Mare (Hu: Nagyküküllő) river valley. The name of village  is thought to originate from the phrases „bö köz” meaning „copius in between” understandably because it is located in an area between two gorges, where the land is typically very fertile. It is first mentioned in the archive documents as Bugus/Buguz in 1332 and in 1505 the first time as Bögöz.  Orbán Balázs wrote:  “according to tradition the village’s oldest name was Hosszufalu, its houses were scattered all the way up to the Fancsika stream, but as it was often disturbed by floods, they moved the village to its current stable shelter. (…) However, this relocation and name change may have happened long ago, its old church reveals the old age of the village, and the papal tithe registry is a testimony to the oldness of the name Bögöz, where this village was already known in 1332 as Bugus”. 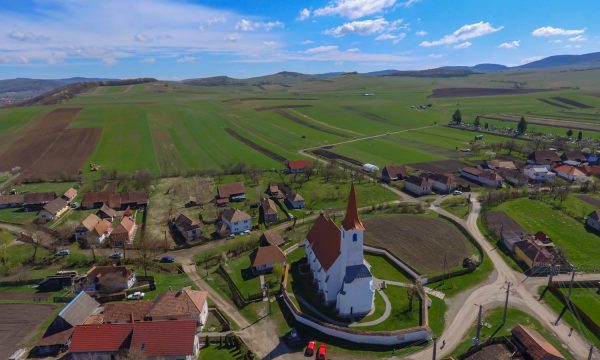 The number of inhabitants has changed a lot over the centuries:  in 1567 it had 39 houses, in 1617 they registered 51 families whilst in 1786 629 families. At the beginning of 20th century the population of the village reached 1112, and before the Second World War it was registered with 1271 inhabitants.

From the middle of the 1950s archaeological excavations started in Mugeni. During the excavations, several prehistoric pottery fragments were found in the fire place of a dwelling. A number of flint objects and polished stone tools, copper pick axe, clay figurines, auroch bones, Dacian ceramic fragments and Roman coins were also among the findings. The flint findings belonging to the stone age (mezo- or neolithic ) are evidence to the fact that the area has been inhabited by various peoples for about 6500 years. These findings also tell us the area was inhabited by Dacians and Romans, and by the 9th century by the Pechenegs, a group of the Turkic people. According to other sources, the name of the settlement may originate from this early medieval period, as it is mentioned in written sources around 1333, in the papal tithe document as Bugus. Another Turkic fraction, the Cumans have a similar word as the name of the village, „bögüz” meaning throat or more precisely mouth. Which makes sense, considering the villages is situate in the mouth of the Bonta Strait.

The Reformed church of the village situated on the left bank of the Târnava Mare is considered to be one of the finest medieval churches of the area. Originally, in the 14th century, i.e. in the Catholic period its walls were decorated by frescoes portraying the legend of St. Ladislaus.. These were discovered and conserved by József Huszka  and Adolf Csehély during the general repair works carried out in 1865, covered by a lime layer.  The church building is generally dated to 14th century, and suffered modifications later, in the 15th century. But according to some scholars, as the church was already mentioned between 1332–1337, part of the church can very well be dated to the Árpád period. (Géza Entz,  Erdély épitészete a 11–13. században, 63). The current church has a late Gothic style sanctuary and several lancet windows and buttresses. It is also equipped with a painted coffer ceiling from 1724.

Later in the 18th century the village had a functioning school, opened as early as 1738 and run by the Szigeti family for 4 generations, until 1866.  With the modern period and urbanization, the settlement also gained a train station (currently a defunct railway), unfortunately for a short period only.

The Reformed church of Mugeni is one of the most important medieval churches along the course of the Târnava (Hu: Küküllő) River. Archaeological research performed by Zsolt Nyárádi and András Sófalvi between 2009–2013, during restoration-renewal procedures,  yielded important information towards a better understanding of the earlier history of the church as well the noble tombs described by  the written historical sources. 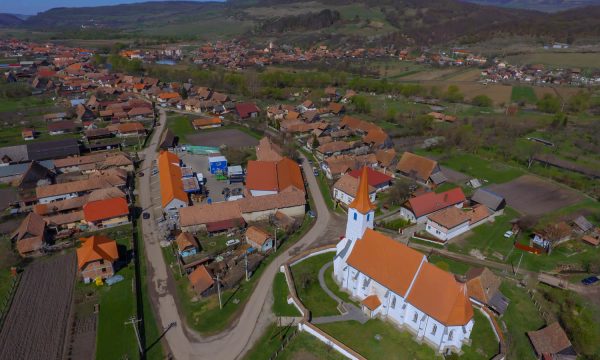 Archaeological research identified the older part of the settlement, dated to the Árpád period, which, like any little Transylvanian village from the 12th–13th century with all probability served as the chore of the latter village, taking advantage of all the local possibilities. Beside the typical ceramic material archaeologists managed to find the remains of some pit-houses belonging to the medieval period.

With all certainty the first construction phase of the church is connected to the medieval village, as shown by the results obtained. The 13th century church, built with a rectangular sanctuary, is situated inside the church visible today. At the beginning of the 14th century, this church structure was enlarged by the addition of a massive nave, a semi-circular sanctuary and a tower. Needless to say the church also gained a sacristy later on, at the start of the following century. With the increasing size of the congregation, the sanctuary was altered again, and the church gained a set of buttresses to ensure the structure’s stability. With the advent of Gothic style at the turn of the 15th -16th centuries, the walls of the sanctuary were strengthened, a new polygonal apse and additional buttresses were built and the northern part of the church gained another sacristy. Apart from some minor modifications (like the dismantling of the sacristy during the Reformation) the church acquired its current appearance in this period.

The thorough research of the reformed church of Mugeni is of major importance, especially in an Eastern European context, being one of the few projects with adequate financial support and human resources during restoration procedures, making it possible to perform necessary archaeological investigations. (Source: Nyárádi Zsolt, „Istennek ditsőségére tsinaltatta” Adatok a bögözi nemesi családok történetéhez, Bögöz, 2016).

Looking for accomodation around Mugeni? Click the button below, and you can find a suitable place in just a few minutes.