After the canonization of King Ladislaus (1192), a more intense religious cult began to unfold around the tomb in Oradea, and in the 14th century Oradea was already referred to as “the Hungarian Compostela” visited by a multitude of pilgrims, including rulers. From the 13th century onwards, there are accounts of the divine judgements at the grave of St. Ladislaus (Regestrum Varadinense).

The first miracles related to the basilica were recorded in the church legend of Saint Ladislaus. One of these stories is about a count who accused a soldier of stealing his silver cup. After the cup was placed on the grave, the soldier took it unharmed, but the count collapsed as he touched it. The legend of the man with a twisted jaw is connected to the reburial of St. Ladislaus in Oradea. According to this church story, a delightful scent could be smelt in the cathedral on this glorious occasion, but one man among those present said that he smelt something foul. As a divine punishment, his jaw was immediately twisted and he recovered his form after long prayers. According to another legend from Oradea, in the hour of St. Ladislaus’ canonization (in the daytime) a bright star was shining over the cathedral for two hours. The miraculous healings recorded by the church legend took place also mostly here at the tomb in the cathedral. Pelbart of Temesvar, a theological scholar, who wrote his works at the turn of the 15th and 16th century also mentioned – as a contemporary witness – the sudden healing of a Dominican monk suffering from an eye disease. According to medieval documents (1406), the specially respected skull of the holy king was left untouched even by the fire, even though even the Hermes that contained the skull was damaged. 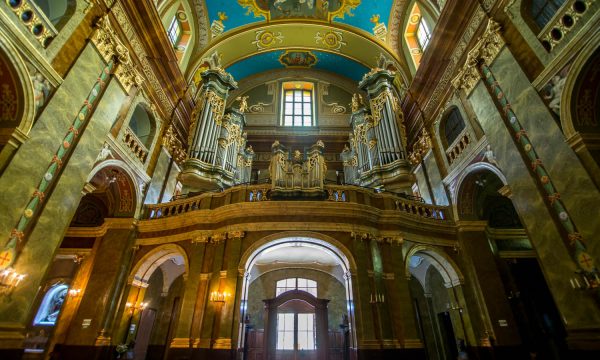 According to medieval records, a marble stone perforated and bathed in St. Ladislaus’ tears was also kept in the cathedral treasury. The legend of the oil leaking from the holy king’s tomb appeared in the hymn of St. Ladislaus and even in the poem Farewell to Várad written by Janus Pannonius. It is possible that this motif became the main inspiration to one of the most famous legends of St. Ladislaus, which was recorded by the Anonymous Minorite monk in the 14th century. According to this story, also called the patrocinium (patronage) miracle, when the Szeklers fought with the Tartars and were in extreme danger, suddenly a tall knight appeared above their heads, dressed in shining clothes and with a crown on his head and he dealt the enemy a heavy blow with the battle-axe in his hand, making them flee. According to this legend, an old Tartar prisoner and the guard of the grave in Oradea also confirmed that it was St. Ladislaus, who came back from the dead and brought aid to his people: “They say that during the battle between the Christians and the Tartars, King St. Ladislaus’ head was not to be found in the church of Oradea. A miracle indeed. So as the deputy custos of this church entered the sacristy to search for the head, he found it lying in its place in a sweat, as if he returned alive from somewhere after a day’s hard work or all warmed up from the heat.” This medieval myth was later used as a separate insertion (Saint Ladislaus) by János Arany in the Fifth Canto of the poem Toldi’s Night. 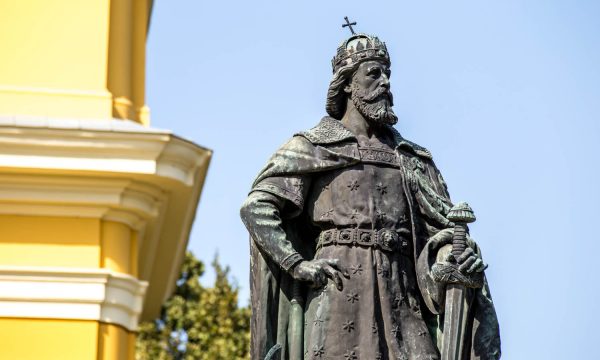 The Valea Roşie Natura 2000 (ROSCI0267) nature conservation site lies only four kilometers north-east from the city of Oradea, in the valley of the Crișul Repede (Hu: Sebes Kőrös, Ge: Schnelle Kreisch) river. 14 plant species, 6 amphibious and one reptile species are counted among the protected plants and animals of this 819 ha area.

The site is dominated by one large deciduous forest, divided into two parts by the river. Small and big clearings break up the tree cover, with marshy spots providing a home to amphibians in some places. The various frogs living in these wet habitats include the common toad (Bufo bufo), the agile frog (Rana dalmatina) and the marsh frog (Rana ridibunda). The characteristic ‘unk-unk’ cries of the males of the yellow-bellied toad (Bombina variegata) and the European fire-bellied toad (Bombina bombina) can often be heard in the mating season that lasts from spring until the middle of summer. The non-venomous grass snake (Natrix natrix) that is common across Transylvania and can also be found here.

A notable plant of the area is the green-winged orchid (Orchis morio). The wet, sandy soils of these habitats are ideal for this purple flowered orchid that is protected in both Hungary and Romania. Before the budding of the trees in the spring, between March and May, we can already notice the fumewort’s (Corydalis solida) red, purple, or sometimes white coloured bloom. If we choose to visit from July to September, we can find the star-shaped flowers of the Aster sedifolius or the carthusian pink (Dianthus carthusianorum). This species got its name after the Carthusian monks who often planted it in the gardens of their monasteries.

Looking for accomodation around Oradea, cathedral? Click the button below, and you can find a suitable place in just a few minutes.