From the revival of Oradea in the 18th century, the Catholic bishopric thought of the cathedral, the bishop’s palace, the seminary and the canonical houses as one ensembe almost from the beginning. The construction of the cathedral began with Bishop Pál Forgách (1747–1757), who asked Franz Anton Hillebrandt, a young Viennese architect, to draw up the plans for the building. The excavation of foundations started in 1751. At this time Italian masons arrived already, lead by Giovanni Battista Ricca. Ricca transformed Hillebrandt’s designs, and under his leadership, the base walls had risen to the ground by the end of October 1752, and to the bottom of the windows in 1753. In 1756 the bishop consecrated the temporary cathedral. The energetic construction was halted by two events, Ricca’s death in 1756, and the appointment of Bishop Forgách to the bishopric of Vác. The large-scale constructions of Ádám Patachich, appointed in 1759, were primarily aimed at the development of the aristocratic residence, and the cathedral was pushed to the background. According to a report from 1759, during the last decade, under the supervision of Johann Michael Neumann, the church was completely vaulted, the nave, transepts, the dome vaulting of the choir, its hemispheric closure and the dome under the roof were completed. So were the sacristies and the buildings above it, and the eight side chapels and the eight oratories built above them. Finally, the solemn opening ceremony of the church took place only on June 25, 1780. The church was consecrated by László Kollonitz, bishop of Transylvania, who was appointed Bishop of Várad by Mary Theresa on the same day. Despite the huge size of the cathedral, it does not belong to the most beautiful baroque churches of the 18th century, the main reasons for which are the lack of stylistic unity and the wrong proportions: the towers are too low in relation to the church’s mass. One of the greatest artistic values of the building is the dome fresco made by Johann Nepomuk Schöpf, representing the heavenly triumph of Christ the Lord. This was the only painting of the church until 1878, when it was painted almost in its entirety by Ferenc Storno. Vinzenz Fischer’s main altar, as well as the two large side-altars of the transepts were painted in 1777. The southern altar represents Saint Ladislaus, who made a pledge to build the cathedral. There are four altars in each aisle, which had been completed by 1785: their oil paintings represent the Holy Cross, St. Michael Archangel, St. Paul and St. Peter’s leave-taking, as well as St. John of Nepomuk, St. Stephen, St. Borbala, St. John the Apostle, and the Holy Trinity. The last five are the creations of Johann Ignaz Cimbal.

The archaeological research of the cathedral represents one of the greatest challenges of understanding the medieval history of Transylvania. The issue was properly addressed by the scholars and archaeologists Tamás Emődi, Nándor Mihálka and Kitti Porsztner, who conducted intensive archaeological investigations during the restoration procedures of the fortress ensemble. The excavations performed in 2015 were meant to contribute to the restoration of the fortress, intended to improve merely the façades of the cathedral, since the main strategy was to expand and clarify the already existing ground-plan from the beginning of the 20th century. 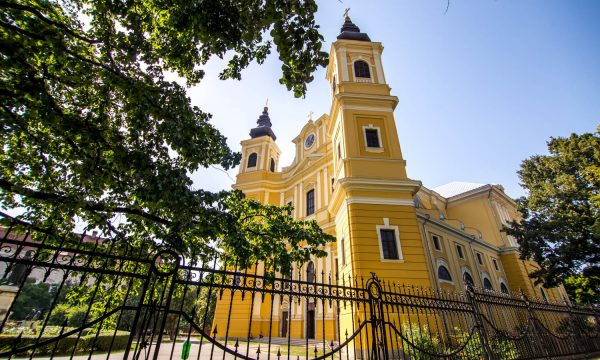 On the north side, through the several opened sections the northern echelon of chapels  was uncovered, as well as the Romanesque style tower, which was re-built by bishop János Vitéz, and a small segment of the sanctuary. Based on the measurements of the foundation of the sanctuary, with all certainty the church also had an apse chapel, thus explaining why in this place archaeologists also found a grave dated to the Árpád period, with an S-shaped hair-ring. The sections opened on the south side of the cathedral revealed the southern façade, showing how locals reused the stone material of the walls during subsequent construction works, and that the row of chapels wasn’t maintained on this portion of the church. Results also showed the remains of another outbuilding, apparently a contemporary addition to the cathedral with mounted walls. The north and south façades were built in a Romanesque style, but continued to be used later on in the Gothic period as well, during which the church was rebuilt three times until the 15th century, when the sanctuary was last to suffer adjustments.

During the same restoration procedures the northern row of chapels was uncovered in the west wing of the princely palace, each having a diameter of 4×4 meters. A funerary stone with the engraving CONRAD, dated by Pál Lővei to the 1370s was also among the findings. It originates from the same period as the row of chapels, the time of bishop Demeter. In the south-western portion of the palace archaeologists uncovered the Gothic-period façade with the imprint of an entrance casing and the south-western tower. 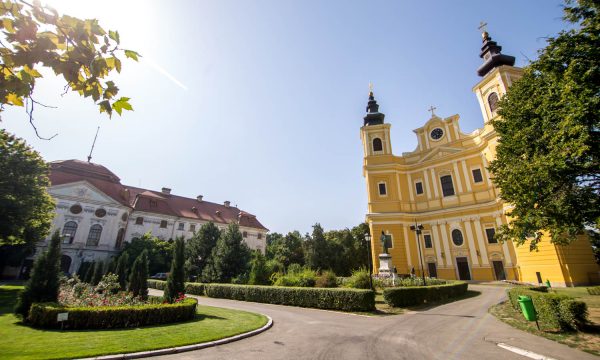 At the same time, the ruins of the sanctuary belonging to the Church of the Blessed Virgin Mary came to light, merely at a 2 meters distance west from the cathedral. The extension of the three-nave Romanesque church began in the 1320s, by extending the western façade by 20 meters westward, and adding new towers. Work continued later in the 1370s, with the addition of a new row of chapels on the northern part of the church (basically a fourth nave). At the start of the 15th century the transept was built together with the tombs of Maria and Sigismund of Luxemburg. Until research showed otherwise, it was believed that the church was 65×23 meters large, but archaeological excavations revealed it to be even larger, having a 85×40 meters layout.

Looking for accomodation around Oradea, cathedral? Click the button below, and you can find a suitable place in just a few minutes.